Home > About Us > Our History

Purchased Edmundson Ronagency, a Preston based Haulier serving the Isle of Man
2007

March 2010. A major upgrade of our UK fleet and a switch over to the manufacturer MAN 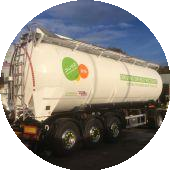 New Powder Tanker arrives, an investment of over £100k for a single vehicle!
2015

"We have worked with Manx Independent for the past twelve years to accomplish our deliveries to the Isle of Man. We have always found them to be professional in their approach and have always offered us an excellent service through proactive planning and communication."