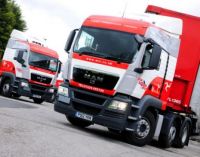 MAN were chosen for the excellent fuel economy - over 9.5 mpg and that fact that the engines are sophisticated enough not to require Ad-Blue to achieve Euro 5 emission standards.

This major investment has seen the vehicles which were replaced being "retired" to the Isle of Man fleet as they pass 5 years old. This has the effect of significantly reducing the overall life of the entire fleet which reduces both fuel cost

"All their staff exceeded any customer expectations above and beyond the call of duty.