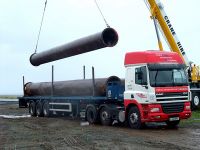 Manx Independent Carriers are pleased to have been contracted by Ramsey Steamship Company to transport dredging equipment from Douglas Harbour to the Ronaldsway, Isle of Man Airport runway extension scheme. The project consisting of more than 500 tonnes of equipment including seventy four pipe sections each 12 metres long was delivered on time and without problem.

The project involves extending the main runway eastwards into the sea to provide greater safety margins for aircraft. Currently a rock armour wall is being constructed using boulders of up to 42 tonnes each which are being shipped by barge from Norway in loads of 25,000 tonnes. Once constructed the area behind the armour wall will be infilled by Dredging International of Belgium. Using material dredged from Liverpool bay, the dredger will connect to pipe work and will pump the spoil into the infill area using the same techniques as those used to construct the massive Palm Island development in Dubai.

In April 2008, following a planning enquiry, the Tynwald granted a major runway extension and resurfacing project at the IoM airport. The design involves extension of the main runway and incorporation of additional runway safety areas (RESAs). The main runway will be extended by 245m (804ft) out into the Irish Sea by the construction of a reclaimed rock-armoured strip of land.

The project is part of a £44m plan which will include the resurfacing of the runway during the summer of 2008 and the extension project, which began in spring 2008 being completed by December 2009.

"Manx Independent Carriers have been collecting and delivering our goods to the Isle of Man from our warehouse for more than ten years now, and have and still do supply a first class service.

"Over the years we have used other carriers but found the service that Manx Independent supply is second to none, this is why we have and will continue to use their service.