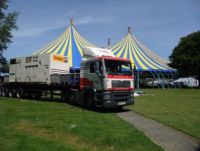 We have delivered almost everything required including stage lighting, seating, security fencing, the generators which will power the sound and light show and even the beer which will be consumed during the concert.

Elton John is set to provide an incredible evening of entertainment which will not be forgotten by those lucky enough to obtain tickets.

“Every year I play concerts all over the world, often in the most extraordinary and exotic places. I never tire of playing, and coming home to play in England in the summer is always a special joy. I have never played in The Isle of Man before, so I’m looking forward to the concert on June 16. The summer audiences always come prepared to enjoy themselves, so be ready to be up on your feet, dancing and singing. Those fans who have been with me since the early days might remember that I recorded a song called Val-hala in 1969 on the Empty Sky album – so that must be a good omen. See you in June!”

"We have worked with Manx Independent Carriers over the past year or so building our Knowhow Home Services delivery and installation service on behalf of the new Currys/PC World store in Douglas, Isle of Man. We have always found the team at Manx to be professional in their approach and they have given us and our customers an excellent service through proactive planning and communication, often exceeding our expectations "